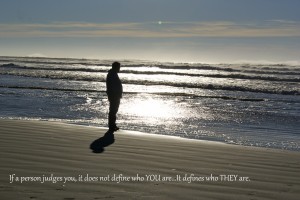 My oldest son just mailed off his ‘Doodle 4 Google’ drawing.  The theme for this year is: ‘If I Could Invent One Thing to Make the World a Better Place…’  here’s the website:

His idea for submission is a ‘Judgement Free Zone’.  Judgement free.  That took me back a bit.  I would assume that he would come up with a better eco-friendly car, or other teenage boy stuff….but to be as deep as a judgement free zone…WOW! 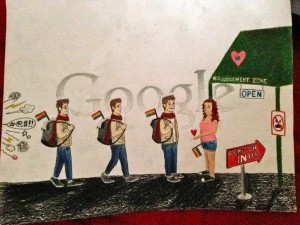 In his drawing it shows a guy walking away from being called names, derogatory comments and insults while carrying his rainbow flag.  As the guy was walking away, it shows him with a sad face, then a blank face, and then a happy face when he sees a girl holding a heart under a green awning with the words:  NO JUDGEMENT ZONE.  I asked him ‘so, this is a gay kid?’.  He said, ‘well it can actually be anyone, but since there is so much attention on gay people right now, I used that.’  I was impressed. The thing that he thinks is needed more than anything to make the world a better place, is a world that is judgement free.  Not just for gay people, but for everyone because judgement holds no discrimination on whom it is for.  And you know what? He is right. 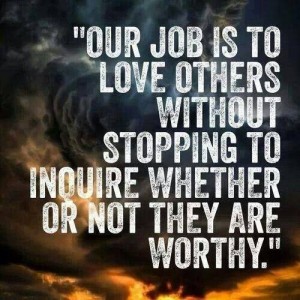 How many times do you judge people?  It could be towards anyone. Maybe someone walking down the street or maybe our Facebook friends or even our family members.

I’ll be the first to admit that I am guilty of this.  I have been trying to focus on not being judgmental during the past year…even before my son drew this picture. Maybe that is what surprised me the most about it, because it’s something close to my heart.

I found that I am not as judgmental against others as I use to be. I have been catching myself when I am doing it.  That’s the first step.  As I have been catching myself more, I have found that I am doing is less and less. I am nowhere close to being where I want to be with it.  I work on this because I want to be the best me that I can be.  I pray many times for God to help me not to be judgmental or days that I am struggling with it.  I trust in His help.

To quote Mother Teresa, “If you judge people, you have no time to love them.”  That’s what I want for my life.  Do you? 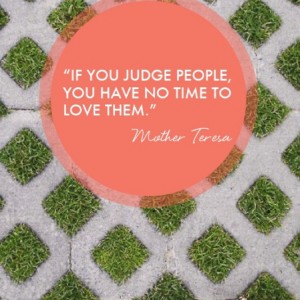